2 Comments
By alexprzybyla Not so serious, Satire 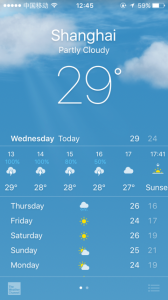 Despite predicting a relatively confident 100% chance of rain at 9:00am today, Rodger’s Weather app was foiled by the vagaries of an unpredictable climate. The morning is cloudy, to be sure, but it still hasn’t rained, and it’s 9:31.

In typical human fashion, Rodger has chalked this up as a personal validation of his John-Henry-esque superiority over the machine. It’s not a relevant comparison, as Rodger isn’t a meteorologist and the Weather app is in no way threatening his vocation, but he is sticking to it. (I think he just really needs a win lately.)

“I had a feeling it wasn’t going to rain,” Rodger confirmed. By this, we know what he really means is just that he really didn’t want to carry an umbrella, and is now bitter at having had to do so when the predicted rain did not appear.

Scientists have offered two possible explanations. One school of thought reasons that this may be due to the relative lack of visible and tangible threats faced by modern humanity, particularly urban residents. Without a visible foe over whom to regularly claim victory, such as wolves, snakes, or the sea, humans are acting out, finding challengers in Weather apps, fantasy football, and online message boards.

The second potential reason is the lack of positive engagement offered by impersonal Weather apps. Humans become confused and skeptical when new characters enter the scene, and the strange is often deemed as hostile. Weather apps have proliferated in the past decade and are now present in the pockets of a vast number of humans, and the growth may have been too rapid for flighty humanity to absorb without some measure of fear.

Adding to the problem, anti-apps activists maintain that Weather apps have done nothing to prove that they have peaceful intent and only come as helpful friends.

At press time, Weather apps were preparing to release a statement in response to the strongly-worded Weather Apps and Humanity study, which concluded with the lead scientist going on a rant about how he got soaked in a deluge the night before after his Weather app predicted ‘mostly cloudy and no rain’.